The scenic Loikansaari, A peaceful holiday location, On the shore of Lake Saimaa.

Make a booking or an inquiry

Directly from the company

Through Booking.com. N.B. Only a part of the capacity available through here.

Sijaintisi: The history of the manor

The history of Loikansaari manor

The Loikansaari estate is one of the oldest-inhabited and farmed places in the history of Sääminki. There was already permanent settlement on the estate before construction of the Olavinlinna castle began in 1475. Even in ancient times, the island offered safety and good conditions for natural subsistence, with its good fishing waters and slash-and-burn-cleared lands. Former residents of the estate were the wealthy Uskinen family and the commander of the Lesser Savonia company Ambrosius Heikinpoika, as well as the master goldsmith Henrik and Erik Kusell. The old cultivation map drawn up of tax purposes in 1643 shows that there were two separate buildings, fields and forest areas where the current buildings stand. Juho Loikkanen and Erkki Nyrhinen lived in these houses and cultivated the fields until 1651, when the peasant lands became the property of the aristocracy. The name of Loikansaari is believed to have come from its former long-term inhabitants, the Loikkanen family.

In 1650, the Swedish Queen Christina gave the cavalry captain Erik Jönsson Lagercrantz Loikansaari as his fiefdom in reward for his achievements in the 30 Years’ War. The former long-term residents had to make way when the noble war hero started working on a manor worthy of his title, which he christened Lagerholm. The matter was confirmed on 13.1.1651 at the winter district court sessions at Sääminki and Lagercrantz got the permission of the district governor for his undertaking on 16.7.1651. At this stage, a total area of 3 ¾ mantals of land had been adjoined to the manor, which is in modern terms equivalent to around 2,650 hectares. Erik Lagercrantz did not, however, get to be master of the manor for long when the cavalry squadron he had raised was completely wiped out in the Polish War in 1656 and Lagerholm was left without a master.

In 1658, the widow of the founder of the manor, Barbara von Strasenburg, married Major Göran Pistolekors the Younger. This is when the 240 years of the noble Pistolekors family began; a rule of seven generations over the manor of Loikansaari. They managed to keep the estate in the family through the difficult war and famine years. It must be noted that the location of the estate from 1743 onwards, right on the border between Sweden and Russia, created its own challenges for running it. The area of Loikansaari had ended up at that time, following the Treaty of Åbo, on the Russian side.

It is said that there was already a very progressive construction culture at the Loikansaari manor towards the end of the 17th century. Examples of this are the chimneys, glass windows and the painting of the house on the outside with red ochre. These were all very unusual features at the time, because people were still living in the era of smoke cottages.

Many crimes have been linked to the Pistolekors family, particularly to Göran and his brother Abraham and it is said that it is precisely them who coloured the reputation of the entire family line with their acts. The Pistolekorses were masters of self-justification and frequent visitors to the district court sessions. Often, they fled the long arm of the law to Russia where many of them ended up working as officers in the army of the Czar, being of military stock. Both Göran and the next master, his son Adam Pistolekors lived in the manor at Aholahti and from there took care of their lands on Loikansaari as well. The year 1684 was fateful, because Lagerholm manor was completely destroyed with all its buildings, 16 of them in all, in a fire resulting from a lightning strike. Another great setback was in 1713 when the manor was looted completely under Russian control. The master Adam was taken prisoner from Aholahti and transported to Russia where he died in 1718.

In the person of Otto Fabian Pistolekors, Lagerholm got itself a master who regularly resided at the manor in the years 1725-1750 , during whose time the manor became a farm responsible for equipping a cavalryman. In return for cavalry service for the Crown, the farm had a tax-exempt status. The oldest parts of the current building are considered to have been standing when Otto became the master. The next master, in the generation directly after him, was the customs station warden Berndt Adam Pistolekors and after him Berndt Adolf Pistolekors. After him, the estate was administered by his daughter Anna Elisabeth. At that time, in 1897, the estate had 86 head of cattle and the harvest amounted to 550 hectolitres, including potatoes, grain and root vegetables. The harvest was the fifth largest in the Sääminki area. The registered population of the manor was 50 persons..

The time of the Pistolekorses at the Loikansaari manor ended in 1898, when Berndt Adolf’s daughter’s son Selim Lagus gave up the estate. The following decades brought the estate badly into disrepair as owners changed rapidly, lands were sold and everyone took what they considered valuable with them. Some of the changing owners of this period were Hanno Tiainen, the Hirvensalo family, the consul Eugen Wolff and the Kiansteen and Laamanen families.

The Hämäläinen family at Loikansaari

The era of the Hämäläinen family at Loikansaari manor began in 1925, when the grandfather of the current master, Antti Hämäläinen (1901 - 1991), bought the estate from Konsta Laamanen. The Lagerholm name of the estate was removed from the land registry in 1930 and the name Loikansaari began to be used of the estate. At the time of Antti and Aili, traditional agriculture and forestry were practised at Loikansaari and the household was largely self-sufficient. The house had a permanent workforce of four persons and at peak work times, e.g. during the hay harvest, more people were required. Most jobs were done by manual strength alone, but horse-drawn agricultural machines were used to help out in the fields.

The telephone came to the house in 1937 and the post was collected at the railway stop in Aholahti because there was still no road to the island at the time. People listened to the radio and during the war the islanders would gather in the main room of Loikansaari to listen to news from the front. There was a ship jetty in Vanhanrannanlahti, from where a vessel called Sirkka would go to town on weekdays. Otherwise, people travelled by motor-boat from the shore of the home bay, including taking the milk from the estate to town by boat. The year 1953 changed the direction of development. Loikansaari got electricity and the first tractor was obtained. Soon the first car of the estate, a Skoda, was also bought and this was kept in a garage in Apajaniemi. The spring and autumn muddy road periods were difficult from the point of view of going to the mainland.

The ownership period of the second generation began at Loikansaari in 1956, first under the joint ownership of Heikki and Matti Hämäläinen, and in 1961 the estate came completely under the ownership of Heikki. During the time of Meeri and Heikki, there was also a pig farm and a chicken farm on the estate in addition to the cattle, but in 1978 livestock farming was abandoned completely. There was small-scale garden production on the estate, but the actual fields were given over to sugar beet and potato cultivation. Contract cultivation of sugar beet continued continuously for 34 years from 1966 and ended in the autumn of 2000. During the time of Meeri and Heikki, wide-scale restoration work was done in the fields, old pastures were turned to forest and the production direction of the estate swung from animal husbandry to agriculture and rural tourism. During their time, machines were brought in to work on the fields, but maintaining an outside workforce became expensive.

The road link to the mainland became available when the Loikansaari road was completed in the autumn of 1964. This also made it possible to start up the rural tourism activity a decade later. To begin with, Meeri and Heikki rented out one cottage and the storehouse in the yard area, but when demand rose, more rental cottages were built in 1977, four in all. Since the beginning, the clientele in the rental cottages has been international.

The changeover to the third generation took place in 1994 when Antti Juhana Hämäläinen stepped into the master’s shoes. Pirjo joined him in 1996. To begin with, they continued working on the fields with sugar beet, but for reasons of profitability it was changed to cumin cultivation in 2000. Antti continued working with the tractor throughout the whole of the first part of his stewardship, until 2006. By 2004, the tourism operation had become the main source of the estate’s revenue. Five new lakeside villas for rental use were built on land acquired next to the Loikansaari manor. The earlier holiday cottages had already been fully renovated for the summer of 2000.

On the year 2014 machine labour and cultivation have been given up completely on the estate. The fields are rented out and the forest land area of the manor has been increased. Antti has started a completely new activity in offering services directed at the owners of holiday homes and Pirjo focuses fully on the cottage rental business.

2014 is a year of celebration at the Loikansaari manor. Rural tourism has been carried out continuously for 40 years. 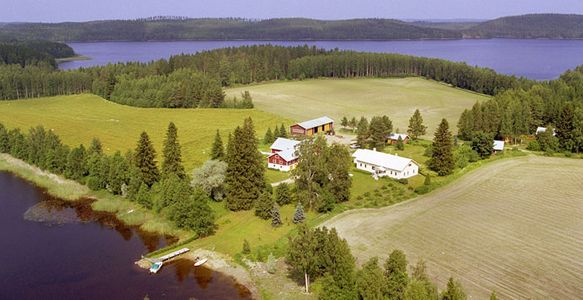